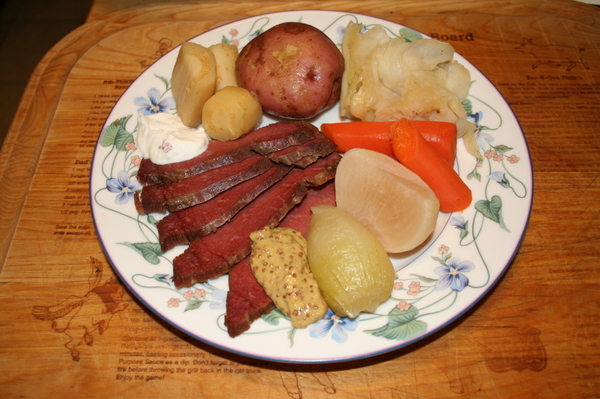 Was it worth it?  Definitely.  I'll say that right off the bat.

Just wanted to start off by saying that.  People really seemed to like the corned beef - the one I've been working on one way and another since last week and have been posting about just as long.

I've got a bunch of pictures to go through so I can put these last few corned beef-themed posts together, and I thought I'd be able to do it this morning, but other things came up and I've barely made a dent.

I will say, just as an FYI, that if you have the inclination, brining your own brisket is the way to go.  The final product was so much more aromatic, so much more flavorful, than the pre-brined one I bought at the store.  I'm so glad I did this.  Sure, I had to start it over a week ahead of time, but for most of the time, the brisket just hung out in the fridge, brining away all by itself.  (Or themselves, since there were 4 briskets.)

And the Horseradish Cream and the Guinness Mustard?  Dee-licious.

But for now?  I've still got some dishes to clean up from last night.  And Julia wants a snack.  And Alex has a friend coming over in a little over an hour.  And so on.

Yes, it's Corned Beef day today.  I've got lemon sponge pies and tarts in the oven - Julia helped measure ingredients for the filling earlier.  And in a moment, I'll be taking the briskets out of their briney baths and wrapping them in plastic til a bit later this afternoon.  I've got vegetables to prep and some tidying up to do...a table to set...serving plates and so forth to decide upon...and then about mid afternoon the cooking will begin.

I've got the camera nearby and I'm taking pictures of all these food-related processes, and my goal is to get that all posted in the morning.

But for now - I think it's time to put the laptop in the other room.

I'll be back tomorrow to let you know how everything turned out.

Anyway, in an attempt to organize my scattered thoughts, here goes...

1.  clean out the fridge (to make some space)

4.  Make Horseradish Cream and Guinness Mustard from the recipes in Bon Appetit to go with the Corned Beef dinner tomorrow night.

5.  Prep the vegetables for tomorrow - peel, chop, slice, dice - whatever they need.  Except the potatoes, because they'll get brown.  And I don't need to peel them anyway.  So never mind that part.

Corned Beef Project: Day 5 - The Turning of the Briskets (and no, there was no Day 4)

Well, as I mentioned this morning, I didn't take any pictures of the briskets in their briney baths yesterday because there was too much else going on and I don't know about you, but I don't think it's all that exciting to see a picture of brisket soaking in brine.  Again and again.  Please let me know if I'm wrong.

Today, however, there is a smidgen of ACTION! going on with the little briskets - today I TURNED THEM OVER IN THE BRINE!  Yes.  I know.  It's hard to hold on to your hat when you read something like that.

So without further ado, here are the step by step photos of the process.  (Sort of.  I had to put the camera down during the actual turning-over part.  So it's more of a before and after photo shoot.  But whatever.)

Here's the pan, plastic wrap removed, right after I removed it from the fridge: 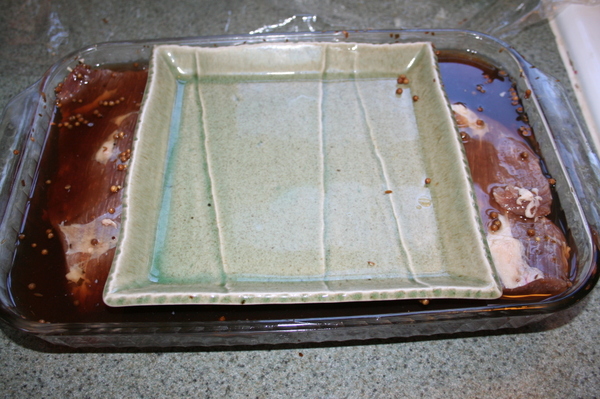 And here is how the top of the briskets looked, once I REMOVED THE SQUARE GREEN PLATE! 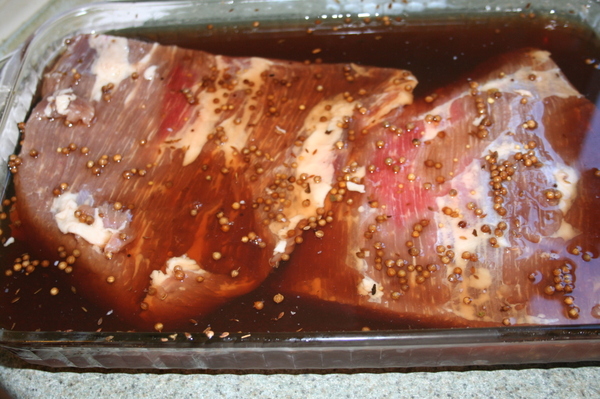 (You can see bits of pink here and there, but it doesn't seem to me that Insta Cure No. 1 is really doing a whole lot....)

As I was flipping these two briskets over, I noticed that the texture of the beef has definitely changed.  It feels...like the cells are swollen with liquid.  Like it's retaining water.  Bloated.  Something like that.  It's hard to describe.

Here's a close up look at the end of one brisket: 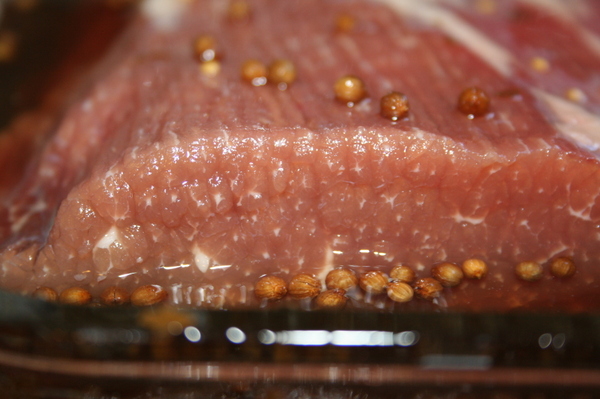 See how puffy the meat looks?  (Doesn't it?  Or am I just imagining things?)

Oh, and I added a little bit more water to each pan - maybe a quarter cup - just to make sure the liquid was covering the meat.

I put the green plate back on these two briskets, covered the pan in plastic, and put this one back in the fridge. 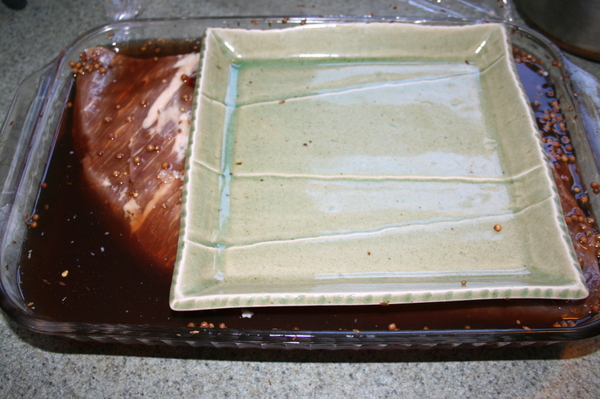 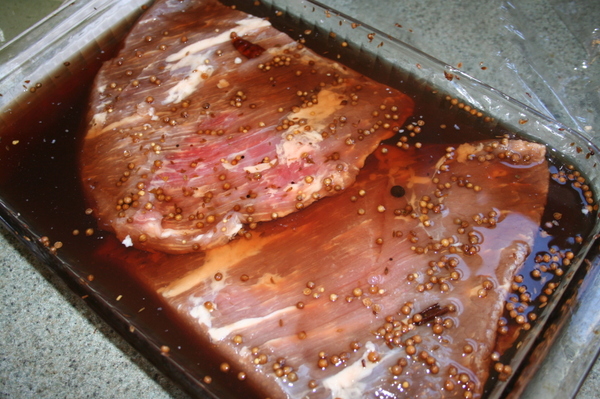 Again, you can see a bit of pink, but not a lot.

I flipped these two briskets over, and added water... 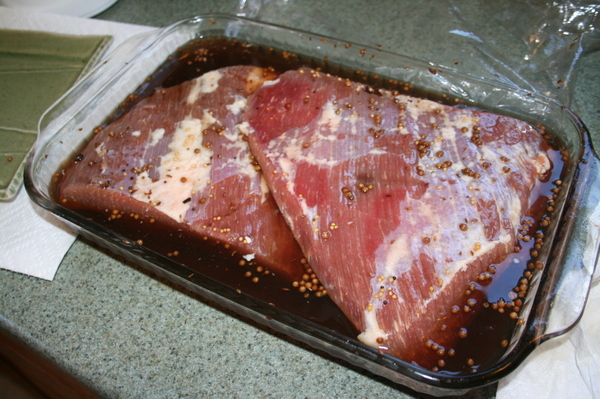 And that's about all there is to say about it.

I think that, unless the briskets start whispering "Zool" when I open the fridge, I'm not going to take pictures again until Friday, which is when I will be cooking them.  Not only these, but ALSO I'll be buying (I am insane) one of those we-already-did-all-the-brining-for-you packaged corned beef briskets to cook as well.  For comparison purposes.  For picture-taking purposes.  For something-more-to-write-about purposes.

Fortunately we have people coming over for dinner on Friday - it's not like Bill and I and the kids will be sitting down to 200 pounds of corned beef all by our selves.

And while a part of me is knocking on my skull to see if anyone's home inside, the rest of me is looking forward to comparing one corned beef with another. Above is a peek along the edge of the pan, where the beef is exposed - it's too thick to be fully immersed in the brine - at least this piece is.

Below, you can see the difference in color, between the exposed edge and the part under the plate: 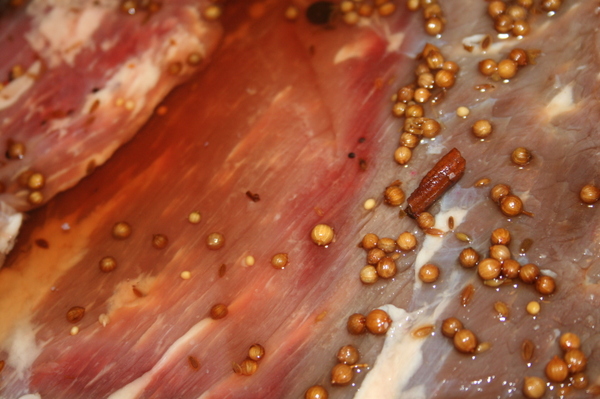 Not much else to report otherwise.  Pretty exciting stuff, no?

As I mentioned in yesterday's post, I'll be taking a picture or two of the briskets as they soak in their brine and journey (passively) on their way to Corned Beef-hood. 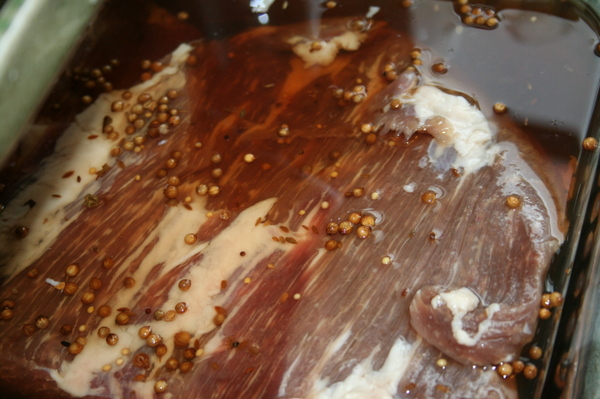 You can see that the meat has begun to change, just by looking at the color.  It's got a "curing" look to it.  The same look raw seafood has when you mix it with citrus juice and let it sit a while.

Corned Beef Project: Day 1 - The Brine and the Briskets

As I mentioned earlier today, I'm going to corn my own beef.  I got the idea from an article in the March issue of Bon Appetit (which came out a month ago - I thought it arrived a couple of weeks ago - but no, because the April issue just came in the mail today.  Shows what I know.).

Anyway - the article not only tells you how to make the brine, but also gives a recipe for Corned Beef and Vegetables, and two sauces - a Horseradish Cream and a Guinness Mustard.  I'll be making those, too, but that will be next week some time.

For today - the first step - starting the brine process. 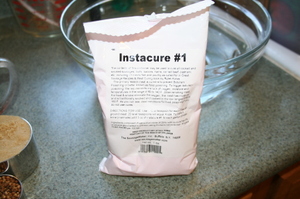 All the ingredients are pretty straightforward, with the exception of "Insta Cure No. 1" - which you can order at sausagemaker.com.  I ordered mine Sunday, I think, and it arrived yesterday.  You have to buy it in 1 lb packages, and you only need a little at a time, but it's not expensive, and who knows, maybe I'll go on some sort of meat curing frenzy for the next several months and use it right up.  Oh - the purpose of Insta Cure No. 1?  To prevent botulism, but mainly to give the corned beef its traditional pink hue.

Here's what's needed for the brine (text from the magazine is in bold and my notes are in italics): 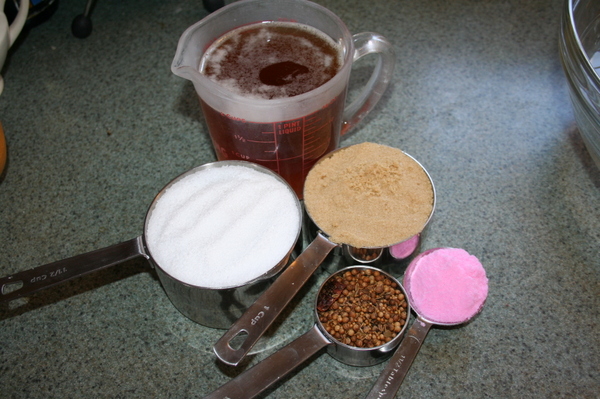 1  6-8 lb flat-cut beef brisket, trimmed, with some fat remaining  (I am actually using four 2-lb briskets.  So we'll see if that ends up being a bad thing.) 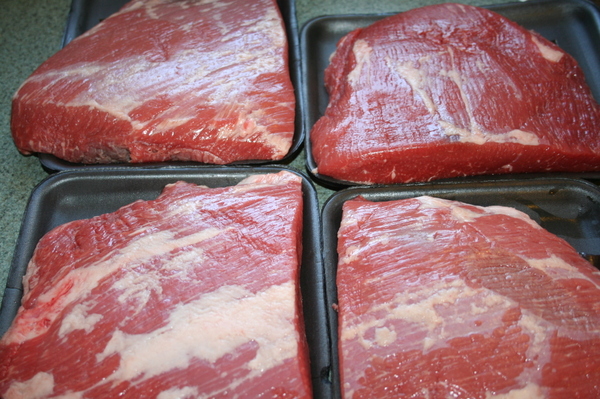 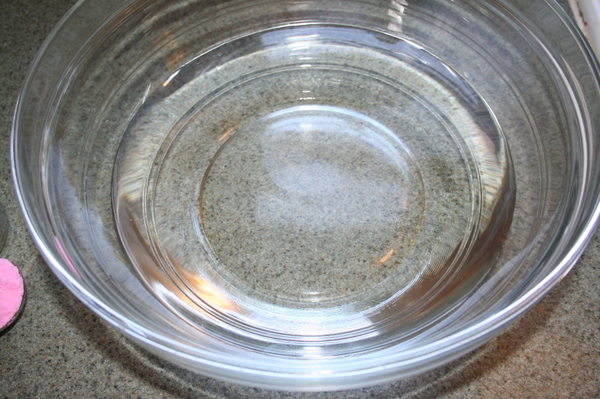 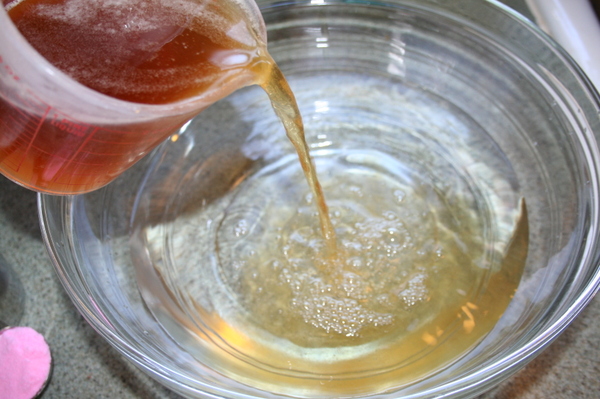 into large deep roasting pan (I used a big bowl - my large roasting pan won't fit in the fridge unless I remove everything else). 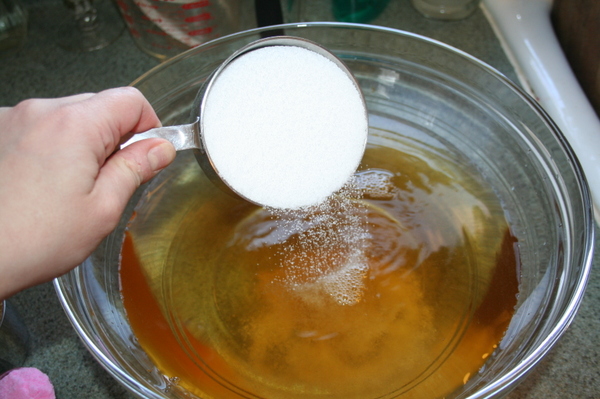 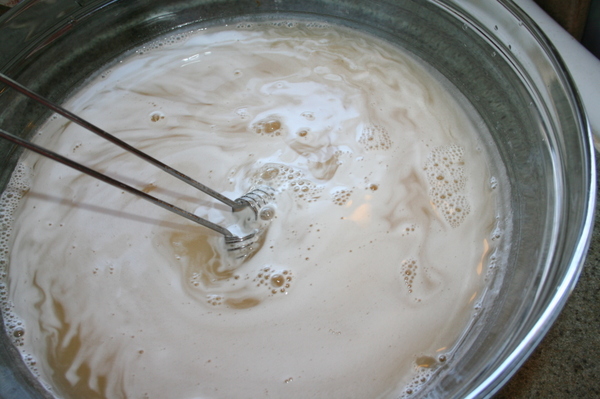 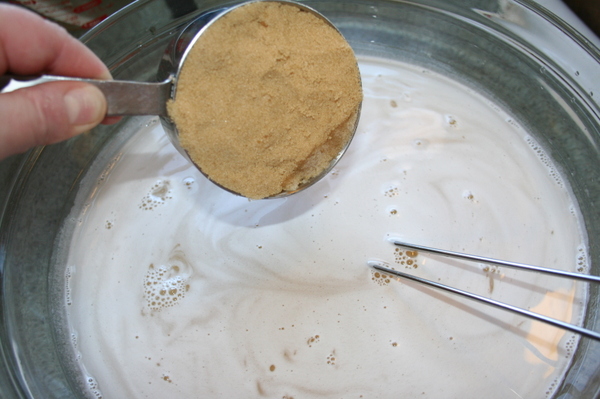 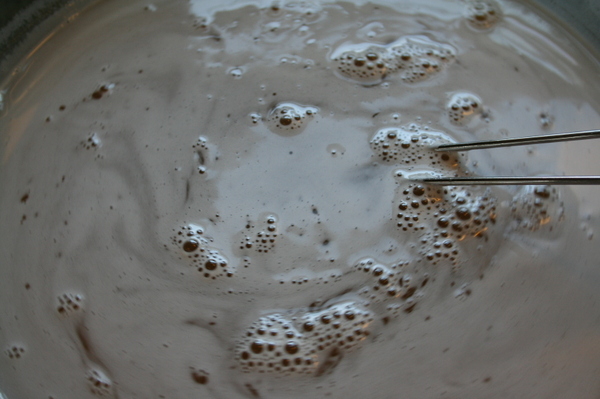 If desired, stir in Insta Cure No. 1. 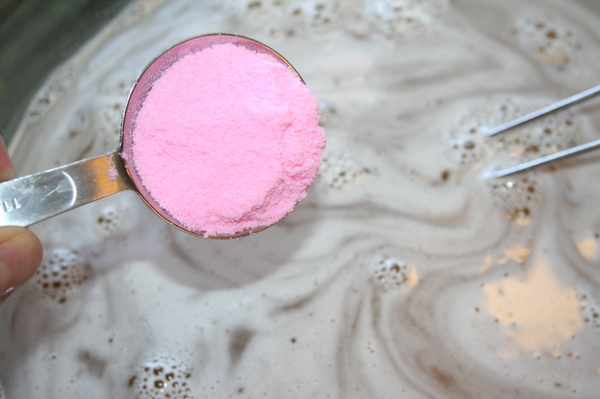 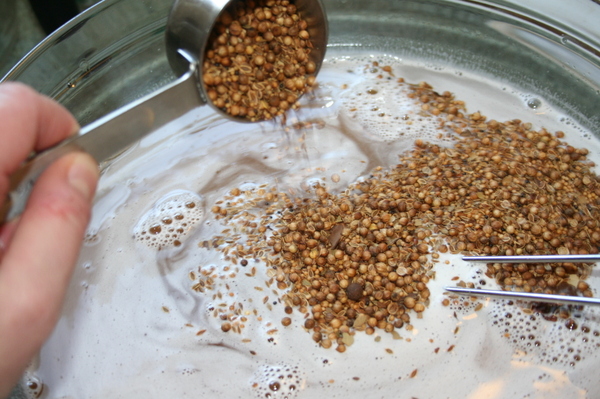 Pierce brisket all over with tip of small sharp knife.  Submerge brisket in liquid, 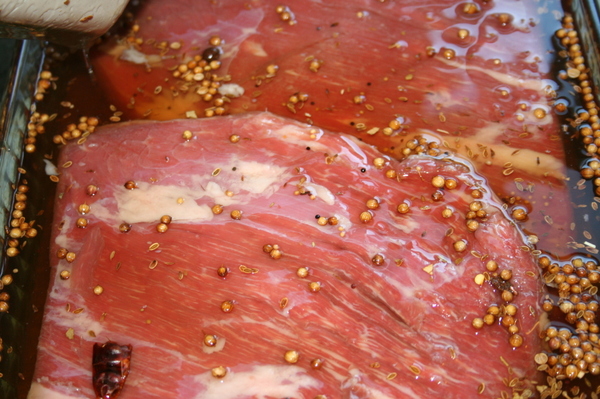 then top with heavy platter to weigh down. 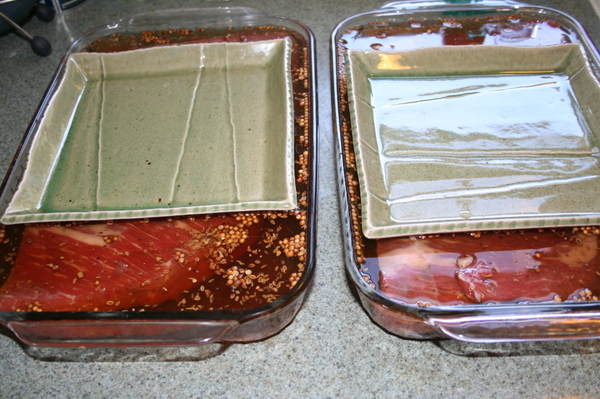 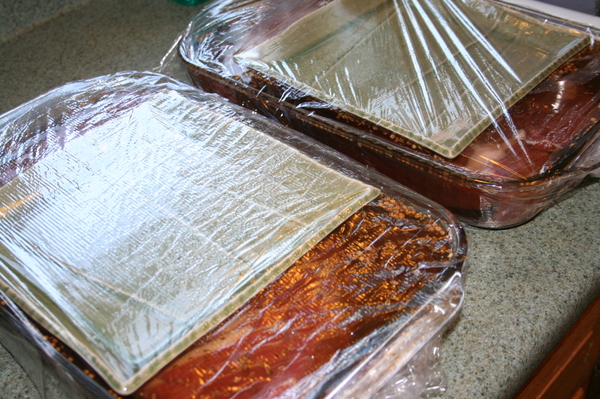 And so that's where things are now.

I will give out one piece of advice - even if you think it's a good idea, don't put a few layers of paper towel under the pans of brisket.  Somehow, the absorbant properties of the paper towel will entice the brine to creep out from under the plastic wrap.  Trust me.

I'll be taking a peek at the brisket tomorrow to see how things are looking.  And I'll keep you posted.