I couldn't come up with a better name.  Or a shorter one.  Unless you count the working name of "Stack" as a good title for this recipe.  It works, but doesn't sound all that appetizing.

They're named "Opening Day Salmon Cakes" because they were made with the last of the salmon that Bill and Joe caught on Opening Day of Trout Season in RI. 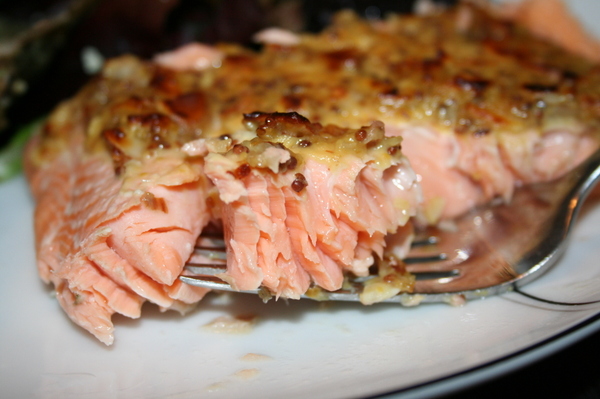 This is what I made for my husband's birthday earlier this week.

We had gone in search of whole snapper, but no luck there, so Bill picked out a nice piece of Wild Caught Alaskan Salmon and a dozen oysters, and I took it from there. 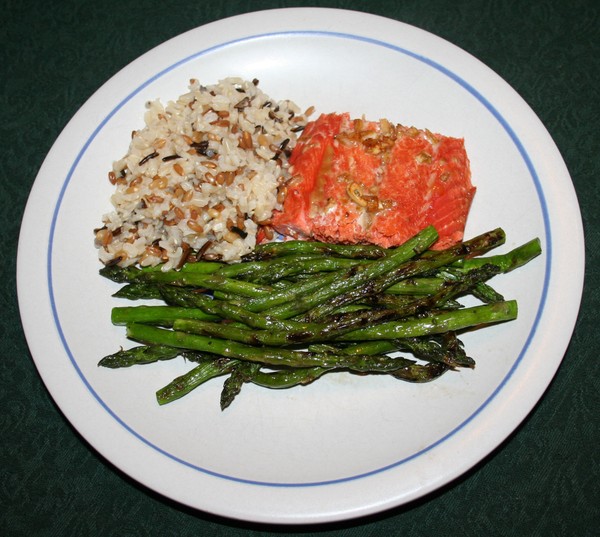 I hadn't even planned on this "menu" but I was in the grocery store and saw some beautiful Sockeye Salmon filets and at that point I had no choice any more.

Tonight's dinner was the following:

Smoked salmon (that we brined yesterday and put in the smoker this afternoon) and potato salad.

Here's how we ate it...chunks of smoked salmon on a Ritz cracker with a small dollop of sour cream - trust me, it's a fabulous combination of flavors and textures.

The potato salad was this:

About a dozen small-ish red-skinned potatoes, cut into 3/4" cubes (approximately), boiled until just barely fork tender, then tossed with olive oil, salt and pepper, smashed garlic (about 6 cloves), and fresh thyme and sage leaves. I put this mixture on a small metal pan and popped that into the smoker while the fish was going, and left it for a couple of hours. Just before we ate, I tossed in a quarter of an onion, minced, and some fresh mixed baby greens from the garden and a little mayo to bind it all together. It was really, really good, if I do say so myself.

And we had some wine - a Kendal-Jackson blend of Zinfandel and Shiraz. All-in-all a rather (okay, I almost wrote "gusty" as an adjective to describe the meal...I am still trying to figure out what I really meant to write...but actually "gusty" kind of works....) boldly flavored meal. It was yummy.

Also - we have fresh baby peas ready in the garden (whatever Alex has not consumed already)...and a few strawberries, too. And (please try to contain yourself) - little baby tomatillos have appeared!

The tomatillos are a big deal to us - last year our friend John was in charge of starting all the plants from seed and he somehow FORGOT to start the tomatillos. (Not that we didn't have dozens of other things growing, but still...) So we're particularly excited to have them now.

That's about it. Julia's waking up from her late afternoon/early evening nap. Hopefully I can keep her up for an hour and a half or so, then give her a good feeding and maybe, just MAYBE, she'll sleep for a whole 3 hours straight after that...of course, now that I've said something, it ain't gonna happen.