I ended up skipping a couple of French Fridays with Dorie weeks in December.  I didn’t want to – in fact I’d made most of the December recipes ahead of time.  But then the holidays kind of took over and I slacked off in the Dorie department.

So I was quite determined to get back on track this month.  And what a lovely way to start – mushroom soup!

And it couldn’t be simpler.

I made a batch of chèvre recently.  Have I mentioned how much I love cheeses made with goats' milk?  Something about that tang...yum.  I wish we had more land.  I'd raise goats.

When we were planning the menu for this year's Oktoberfeast (and, FYI, Bill apparently hates when I refer to it as Oktoberfeast.  "Because it's OktoberFEST!" he said with great exasperation yesterday.  I told him on my blog I'm focusing on the food part of it, and so it's a FEAST.  And it's my blog.  So there.) we knew we'd make the sauerbraten, the spaetzle, the sauerkraut, red cabbage...decided against the Onion Cake this year...Bill requested Linzertorte...and it was up in the air as to whether I'd make bread or not.  It's not like we NEED the additional starch in the meal - the spaetzle is plenty.  But...I like to bake bread...and it's good for sopping up that last bit of gravy...so...in the end, I made bread.  But that's another post.

I could eat risotto every day if I didn't like so many other foods as well.

On Saturday I made a large batch of risotto and I used some wild mushrooms that our friend, John, had picked in the fall.  (This is why I've called the mushrooms "Really Wild" rather than just plain ol' "Wild.")  John was on a mushroom-foraging kick for quite a while, and fortunately he shared some of his findings with us.

Sometimes I take photos of something I'm making, but then get busy with other posts and forget (or neglect) to post some of the older recipes and photos.  Like with these eggrolls.  I made them in...early June.  Okay, so that's only about 5 weeks ago.  Could be worse, I suppose. 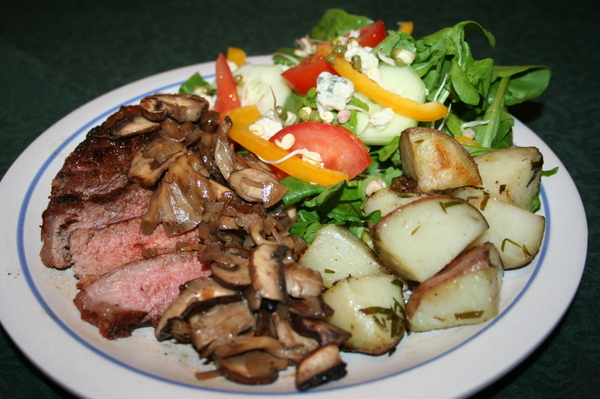 Again - comfort food.  You walk into the house while the chicken is roasting, and you want to stay for a while.  At least, that's how it should be.

I don't do anything ultra-fancy - no herbs, no lemon cut up and inserted in the chicken...mine is very basic.  And I think that's why it's so good, if I may toot my own horn on my own site.

Cut up a couple of large onions - just in chunks - and put them in an oven-proof pan of some kind. 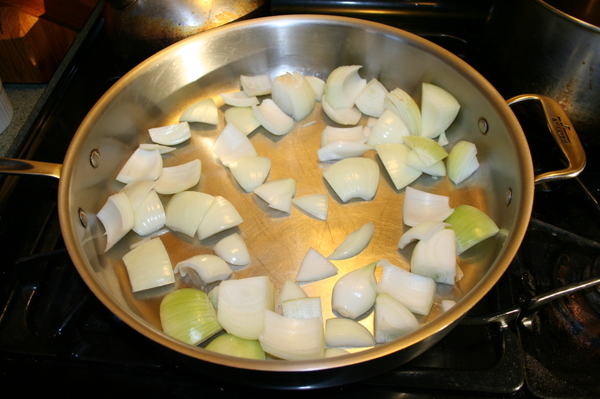 Then wipe off 20 oz (2 10-0z pkgs) of white button mushrooms or baby bellas.  You want whole ones, not the sliced ones.  Put them in with the onions. Next, clean out a good-sized roasting chicken - rinse it with cold water and pat it dry with paper towels.  SAVE THE PACKAGE OF INNARDS!!  Tuck the wings under the back - as if the chicken is leaning back in an office chair, fingers interlaced behind his head - well, if he still had one.  Basically you want the tips of the wings tucked under the chicken's back.  Place the chicken on top of the mushrooms and onions. 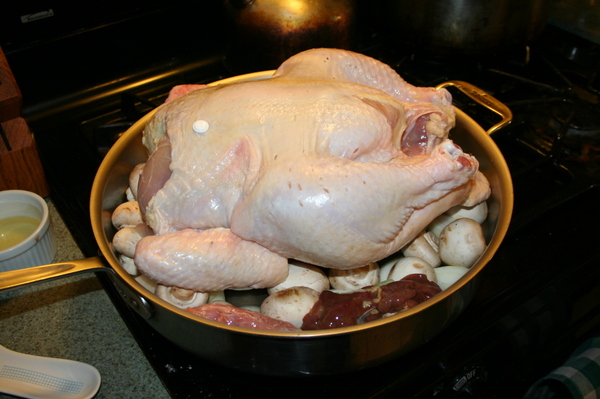 Oh - and that package of innards?  Actually, it's not just innards - it contains the liver, heart, gizzard and neck.  Place them all around the chicken on top of the mushrooms and onions.  Flavor, folks.  Flavor.

Now, in a little bowl, combine kosher salt and freshly ground black pepper - either half and half or about 2/3 salt to 1/3 pepper.  Sprinkle this mixture liberally all over the chicken and the liver, neck, etc.  You want most of it on the chicken's skin. All set?  Now, place the chicken in the middle of your oven, and set the timer for an hour.  No - it might take longer, but this is when I want you to start checking on it.

At the hour mark, turn the pan so that the side of the chicken facing the back of your oven is now facing front.  Ovens have hot spots inside, and you want the chicken to cook evenly.

When the skin is a gorgeous dark golden brown, and when the legs are very wiggly when you shake one, and when the juices run clear when you slice into the thigh, remove the pan from the oven.

Take the chicken - carefully - off the mushrooms and onions and put it on a platter - and don't touch it.  Don't cover it with foil either - the skin is crackly and crisp right now - if you put foil over it, you'll basically be steaming the skin and it will lose its cracklyness.

Now, take a look at the onions and mushrooms.  Are they nice and dark, or are they still kind of light in color?  If they aren't dark, put the pan back in the oven and check on it in fifteen minutes or so.  Now they should be nice and dark - if they aren't, then put them back in again for another ten minutes or so until they are well cooked.

While the onions and mushrooms are finishing up in the oven, take about half a stick of room temp butter and an equal amount of flour, and mash them together with a fork until the flour is completely incorporated in the butter.  Also you want to have available some chicken stock (home made or not - whatever works for you - and some dry white wine.

Okay, once the mushrooms and onions are nicely cooked, place their pan on a burner of your stove and remove the onions and mushrooms for now - just put them in a bowl nearby and keep them handy.  Same thing with the various chicken parts.  In with the mushrooms they go - we're not done with them yet.

Now add the butter/flour mixture into the liquids left in the pan.  Your flame should be about medium.  Whisk the butter/flour mixture (or beurre maniere, I believe) until it basically melts into the other liquids in the pan.  Now pour in a couple of cups of chicken stock and a cup or so of the wine.  Whisk together and now add the mushrooms and onions and giblets back into the pan.  Cook on medium, stirring occasionally, until the liquids thicken and reduce a bit and the alcohol in the wine is not longer noticeable when you taste it.

I add about a teaspoon or so of dried thyme to this while it's cooking, and salt and pepper to taste.  Remember, some of the salt and pepper you sprinkled on the chicken and giblets at the beginning will have ended up in this mixture - you don't want it to be over-salted. 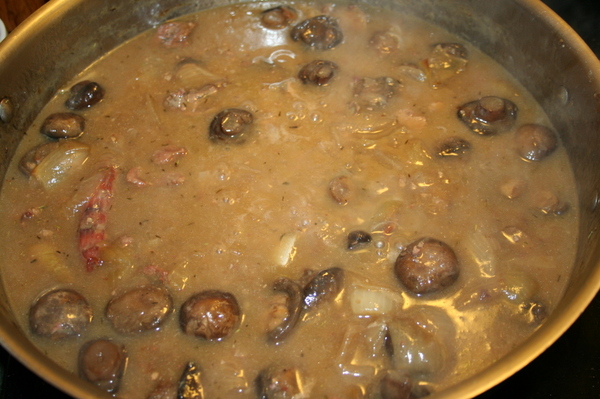 While this is bubbling away, you can cut up your chicken if you want.  I find it's easiest to remove the wings and legs, then cut each side of the breast along the breast bone and cartilage so you have two big chunks of breast meat. 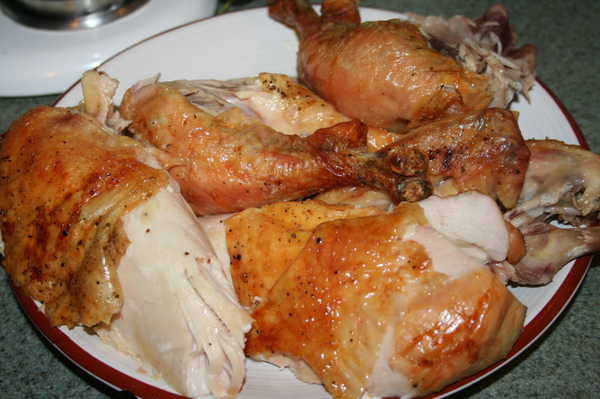 And just so you know, when I was cutting this chicken apart, the wings and legs practically fell apart.  And the breast meat - not a hint of dryness.

What to serve with this?  I made mashed red-skinned potatoes - with milk and cream and horseradish and some roasted garlic I had in the fridge.  And salt and pepper.  I was going to make another vegetable, but I...well, I forgot.  Still - mushrooms and onions are vegetables...

Oh, yes, back to the gravy simmering away on your stove top.  I actually mashed up the liver and stirred that into the gravy too.  I like chicken livers, and my husband has come to like them since we've been married.  But if you think that idea is revolting, then go ahead and remove all the chicken parts - liver, heart, gizzard and neck - and discard them.  You can also, at this point, remove the mushrooms and onions and put them in a separate bowl from the gravy.  Or, you can just serve them in the gravy, which is what I usually do.  OR, you could even puree them with the gravy to thicken it and intensify the flavor.  Your choice. 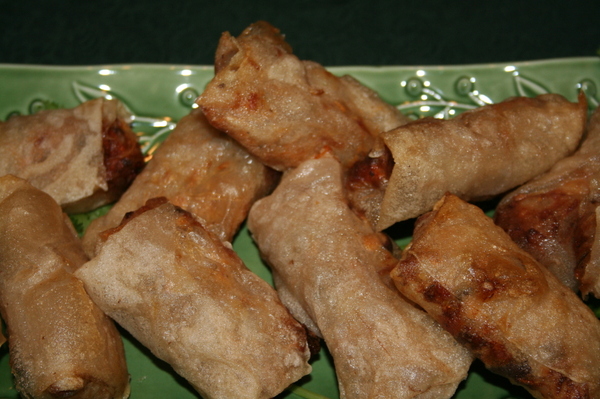 From Keo's Thai Cuisine, by Keo Sananikone.  I mentioned the Spring Rolls in this post earlier today.  Here's my version - slightly different but basically the same.  Mine are larger - like egg roll size - and the actual version has them smaller - little bite sized appetizers. 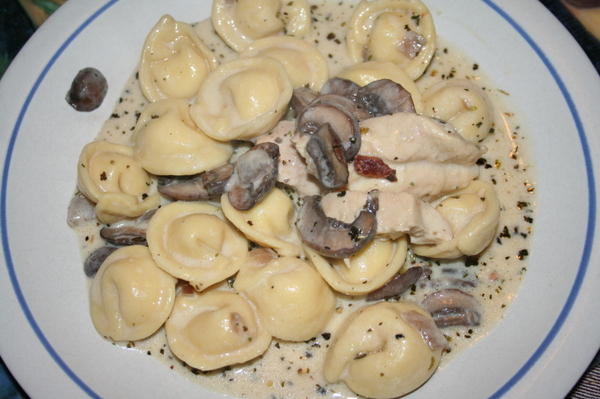 My sister and my brother-in-law went out to eat the other night at Arturo Joe's - a fabulous restaurant in Narragansett.  They both had the Tortellini Carbonara for their meals - my brother-in-law had chicken added to his - and of course the food was sublime.

Anyway, I couldn't figure out a way to sneak down to their house and steal the leftovers, so I figured I had to make my own. 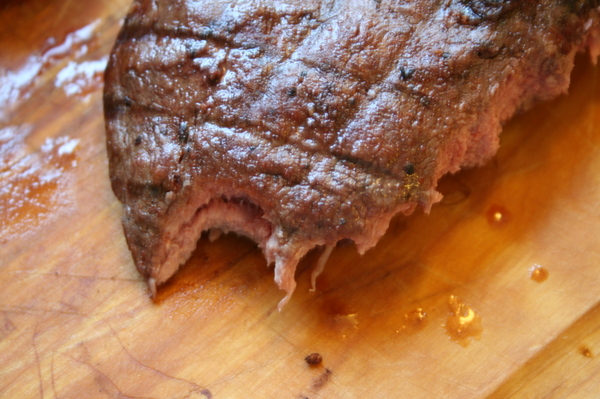 Or, my Mother's Day lunch, cooked and served by my husband.

I made this the other night...

Trimmed and chopped a couple of big leeks and let them sit in a bowl of cold water for a while to clean off any dirt....