4 cups warm water in the bowl of my 6-quart stand mixer.

After the yeast softened and started to bubble, I added

Mix at second-slowest speed for about 5 minutes.

(If the dough is still sticking to the sides of the bowl, add more flower, about a quarter cup at a time, til the dough comes away from the sides.)

Turn dough onto a lightly flowered surface and knead the dough into a ball.  Flatten slightly, and cut into 8 pieces.  Pour some olive oil into a large bowl.  Shape 8 pieces of dough into balls and place in bowl of oil, turning each ball to coat with the oil.  Pour a little more olive oil over them - you want them to be lightly covered with the oil.  Let sit for half an hour or so in the oil. 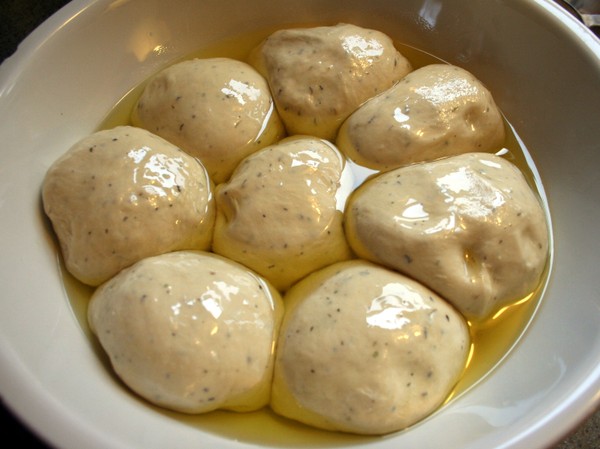 While the dough rests in the oil, preheat the oven and prepare the toppings.

Toppings are entirely up to you.

Here's what I did with mine.

Well, first of all, before I'd even made the dough, I started making a sauce, because I didn't have any canned in the pantry.  I used two small containers of roasted tomatoes from last summer and a 28 oz can of plum tomatoes and their juice.  I also used about half a cup of chianti (what was left in the bottle) and about a tablespoon of fresh oregano I'd frozen in olive oil last summer.  I'd also put in about 8 smashed cloves of garlic.  And some salt and pepper.  And I let that cook down for a while - til I'd made the dough.  Then I put the sauce mixture through a food mill and then back on the stove for a little while longer.  I skimmed some excess olive oil off the top and tasted it - just needed a bit more salt.

Alex and Julia each made their own pizza.

Alex's - as always - some sauce, just a little cheese and an even distribution of pepperoni. For Julia, I'd sauteed some mushrooms and some minced shallots... 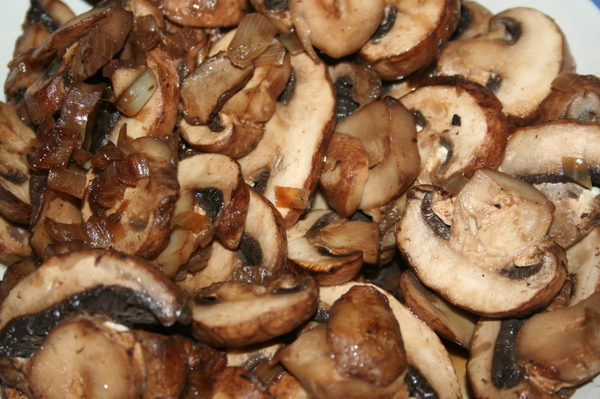 When she made her pizza, she spread out a generous layer of sauce...all of her alotment of cheese plus the cheese Alex didn't use, and poured her bowl of mushrooms right on the center of the pizza.  She topped the mushrooms with a bit of Alex's leftover sauce, and then ate the restspooned the rest of it into her mouth. 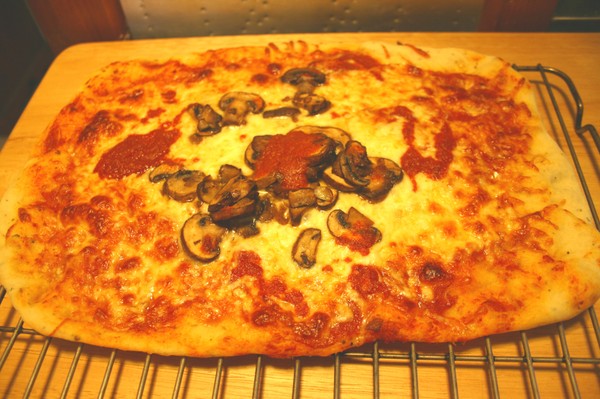 After the kids had made their pizzas, they left, and I got to play.

I'd bought a pound of fresh mozzarella, and I tore that apart while I was cooking the sauce... 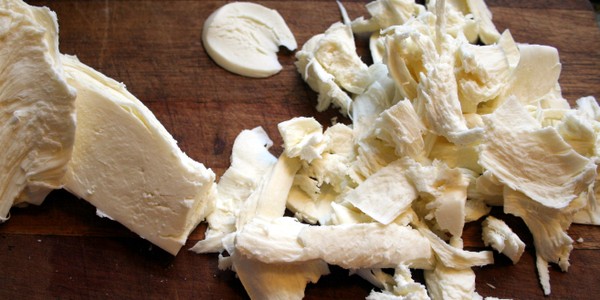 I minced half a shallot and sauteed that with a big handful of baby arugula leaves... 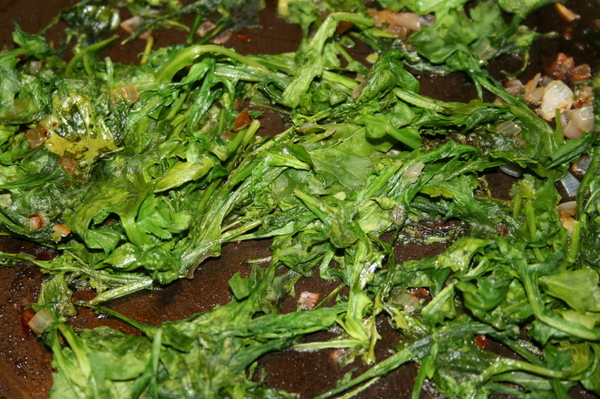 Next pizza - half of the arugula/basil/ricotta mixture topped with torn mozzarella. 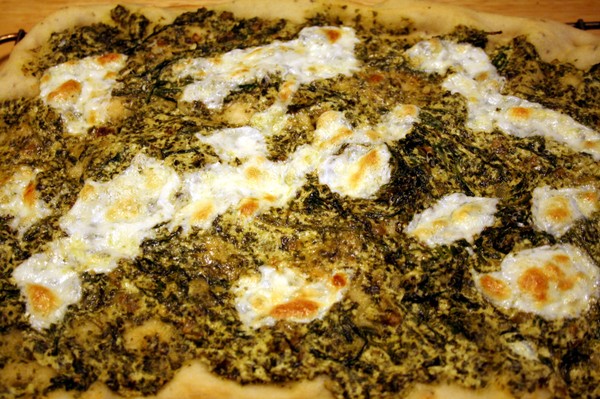 And then...sauce, a whole lot of shredded (pre-packaged) mozzarella, and the rest of the mushrooms. 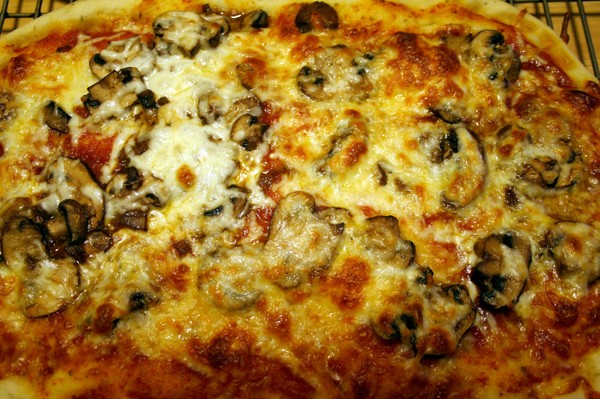 And then...sauce, a lot of shredded (pre-packaged) mozzarella, and plenty of pepperoni.

And then the other half of the arugula/basil/ricotta mixture, a little parmesan, and a generous sprinkling of red pepper flakes. First - simple one - just sauce and both the shredded (pre-packaged) AND the fresh mozzarellas. 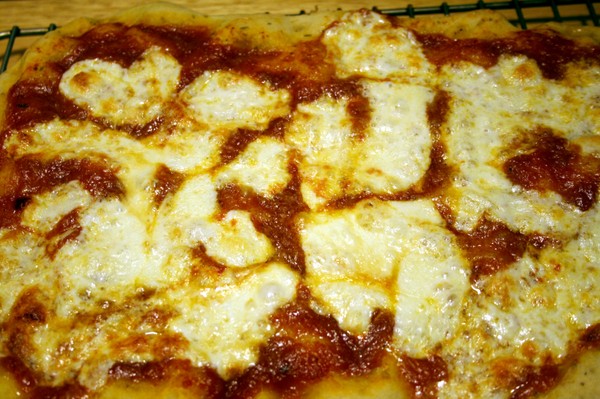 And finally - my favorite of the bunch - pre-packaged mozzarella, then the last of the fresh mozzarella, a tablespoon of minced shallots, and a little can of smoked oysters. 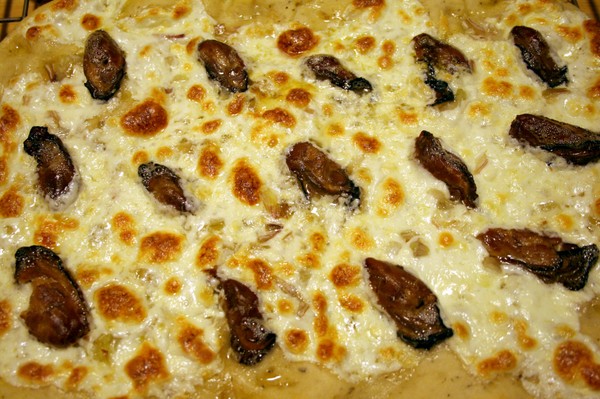 Of course, 8 pizzas was far more than we needed for dinner last night, and that's the whole point of making that many.  Lunch the next day.  And a late night snack the day after that.  And lunches for everyone when Monday rolls back around.