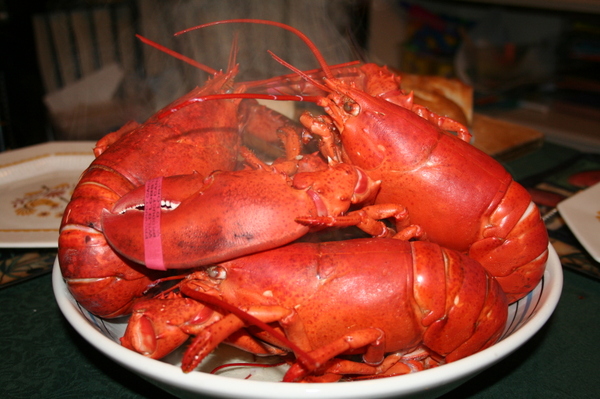 I think this is my personal favorite of all the meals.  I love seafood, first of all, and as far as preparation goes, a boiled lobster is pretty easy.

Littlenecks on the half-shell are easy too - especially if you're not the one shucking them.  Bill usually does that here, which is good because I can't take pictures and shuck a clam at the same time.

Anyway - get nice-sized lobsters - the ones above were a pound and three quarters - plenty of meat per person.  We had two dozen littlenecks, but we also had to share with Alex.  Julia doesn't like them yet.

As far as side dishes, well, we didn't have any.  Bill and I had some cheese and a baguette after the meal, but if you require a vegetable, I'd suggest something else easily eaten with your hands - corn on the cob, while ideal, isn't as readily available in the winter.  Edamame would be my choice.  Or you could start things off with a salad.  But really, it's okay to just have an entire meal of seafood once in a while.

Oh, and why littlenecks?  Why not the obvious choice - oysters?  In this case - because the place we buy our seafood from was out of them, oddly enough.  But I actually think I prefer littlenecks anyway.  Keep them cold until you're ready to shuck them, and don't shuck them too far ahead of time, either. 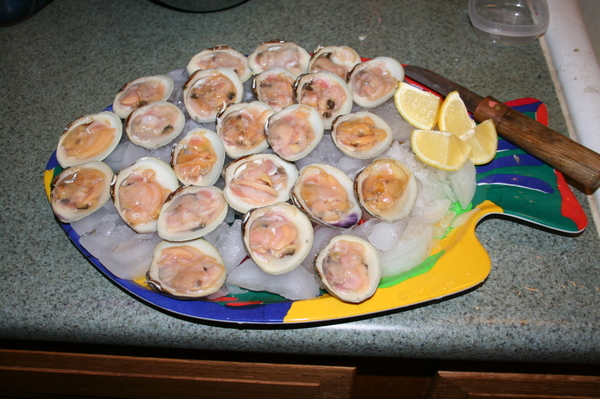 Once shucked, keep them on ice.

Hold the clam in one hand, your clam knife in the other.  Insert the knife right near the hinge of the clam and gently but firmly and with authority, twist the knife until the shells separate.  Hold the clam level, so all the liquid doesn't spill out, and scrape the meat from one shell into the other.  Discard the empty shell, and run your knife under the meat in the other shell so you don't have to fight with it when you try to eat.

If you don't like the briney, oceany taste, you can squirt with lemon juice or top with a bit of hot sauce or cocktail sauce...but if you have to cover up the taste, why are you eating them at all?

Okay.  For the lobsters.  Half fill a pot (large enough for however many lobsters you have) with water and bring it to a boil.  Add salt, and then put your lobsters in.  Some people don't like this part, and yes, it's a little unpleasant, but hey, guess what, if you're going to eat fish or meat or chicken - anything that was alive, well, guess what - it had to die before it was cooked.  Sorry to sound harsh, but, well, that's reality.

So, remove a lobster from the bag it came home in.  Hold it by the carapace, or body.  It will probably arch and splay out all its claws and legs and tail - basically to intimidate you - but it will relax this pose in a moment and then you plunge it into the water, head first (somehow that seems more humane to me - I don't know) and get the next lobster.  Get them in quickly and put the lid on.  Cook them for about 15 minutes.  This may sound pompous, but I can usually tell if they're cooked enough by the smell.  Keep in mind that the more lobsters you have, the longer it will take for the water to come back up to temperature, and therefore the longer you will need to cook them.  I cooked these 4 lobsters for 17 minutes, and they came out perfectly.  Like all seafood, you don't want to overcook the meat.  But with lobsters, you don't want them undercooked, either, because the meat will be kind of mushy.  I think the rule is something like ten minutes for a pound, and then another minute for every quarter pound beyond that.  But again - the number of lobsters in the pot will also be a factor.

I just serve boiled lobster with melted butter, plain and simple.  And I don't even use that at times, because the lobster meat is so sweet it doesn't need anything else.  If you prefer to get fancy, chopped tarragon is a nice addition to the butter.  Or minced garlic.

Okay, now a word about the colorful stuff inside the lobster body.  First of all, I know some people who DO NOT eat anything but the claw and tail meat.  The rest is just too much work to get at.  While I may love these people as friends, I shake my head at them in private because there is so much meat they're missing out on.  And where do you have to be in such a rush, anyway, that you can't hang out and pick meat out of the body or squeeze it with your teeth out of the skinny little legs?  That's part of the whole lobster experience, in my book.  And so are the coral (eggs, or roe) and the tomalley (exploded liver).  The coral is the red stuff - and not every lobster will have that, obviously, since only the females carry the eggs.  Every lobster will, however, have that soft green liver pate-like stuff and okay, maybe it looks gross, but it tastes divine.  I think it's my favorite part of the lobster, truth be told.

And, I discovered, it's really good on a warm slice of baguette.  (There's a little of the coral in there, too.) 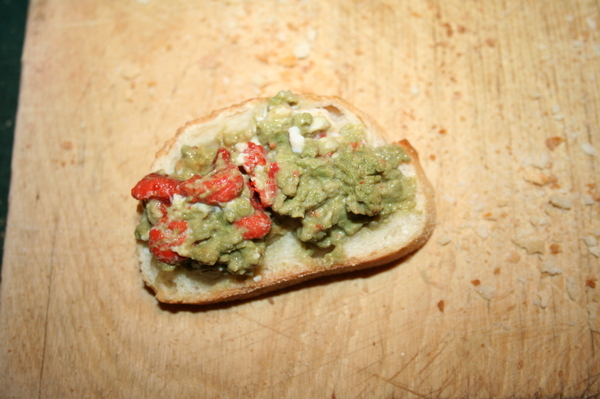 The main point, I think, is not to rush through this meal.  Take your time, and take the time to get every bit of meat from that lobster.

Linger over a good bottle of Chablis.

I think this is my personal favorite of all the meals.  I love seafood, first of all, and as far as preparation goes, a boiled lobster is pretty easy.

Littlenecks on the half-shell are easy too - especially if you're not the one shucking them.  Bill usually does that here, which is good because I can't take pictures and shuck a clam at the same time.